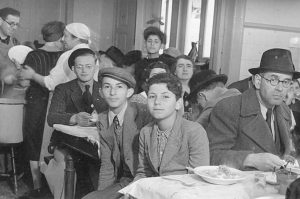 Refugees at the soup kitchen in Lisbon financed by the American Jewish Joint Distribution Committee, 1940

Screening of Disobedience: The Sousa Mendes Story at the Holocaust Museum Houston. Free and open to the public.

Ceremony “Remembering Aristides de Sousa Mendes” with Houston Diplomatic Consular Corps and remarks by Louis-Philippe Mendes.  Free and open to the public, but seating is limited.

In conjunction with the above events, the Sousa Mendes Foundation presents an exhibition of original artifacts, “Sousa Mendes and his Visas to Freedom.” On view will be passports with the original Sousa Mendes visas along with personal items of refugees rescued by Aristides de Sousa Mendes.