The visas for the LEVY and VAN ITALLIE families were authorized by Aristides de Sousa Mendes in Bordeaux on June 20, 1940.

In Bordeaux, Ferdinand and Tilly VAN ITALLIE, the parents of Hugo VAN ITALLIE, boarded a Dutch ship bound for England, but their boat, also carrying the Dutch poet Hendrik MARSMAN, hit a mine and was sunk on June 21, 1940.

The LEVY and VAN ITALLIE family crossed into Portugal. A young Jewish boy from Germany, Gerhard BRUNELL, accompanied them by request of Aristides de Sousa Mendes.

Gerhard BRUNELL sailed to New York on the Nea Hellas in July 1940.

The LEVY and VAN ITALLIE families sailed from Lisbon to New York on the vessel Hakozaki Maru in October 1940. 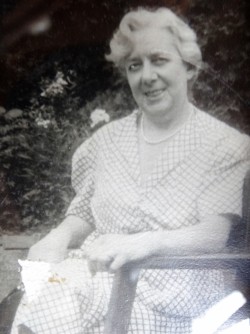 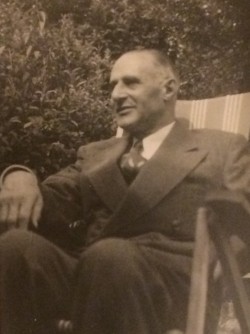 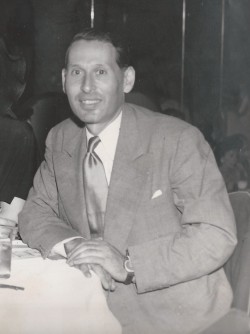 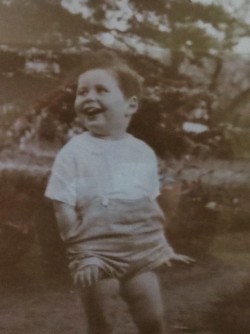 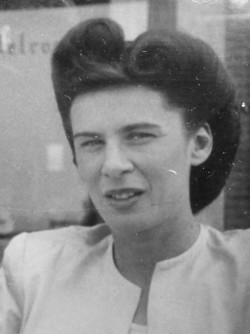 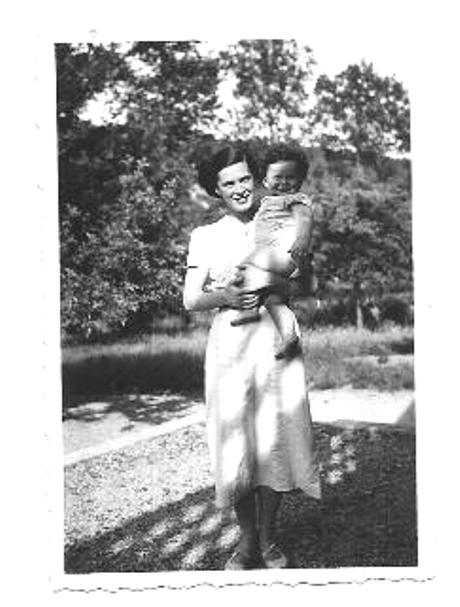 Marthe Mathilde Caroline Levy van Itallie with her one year old son Jean-Claude (Bichon was his nickname as a baby) van Itallie, 1937 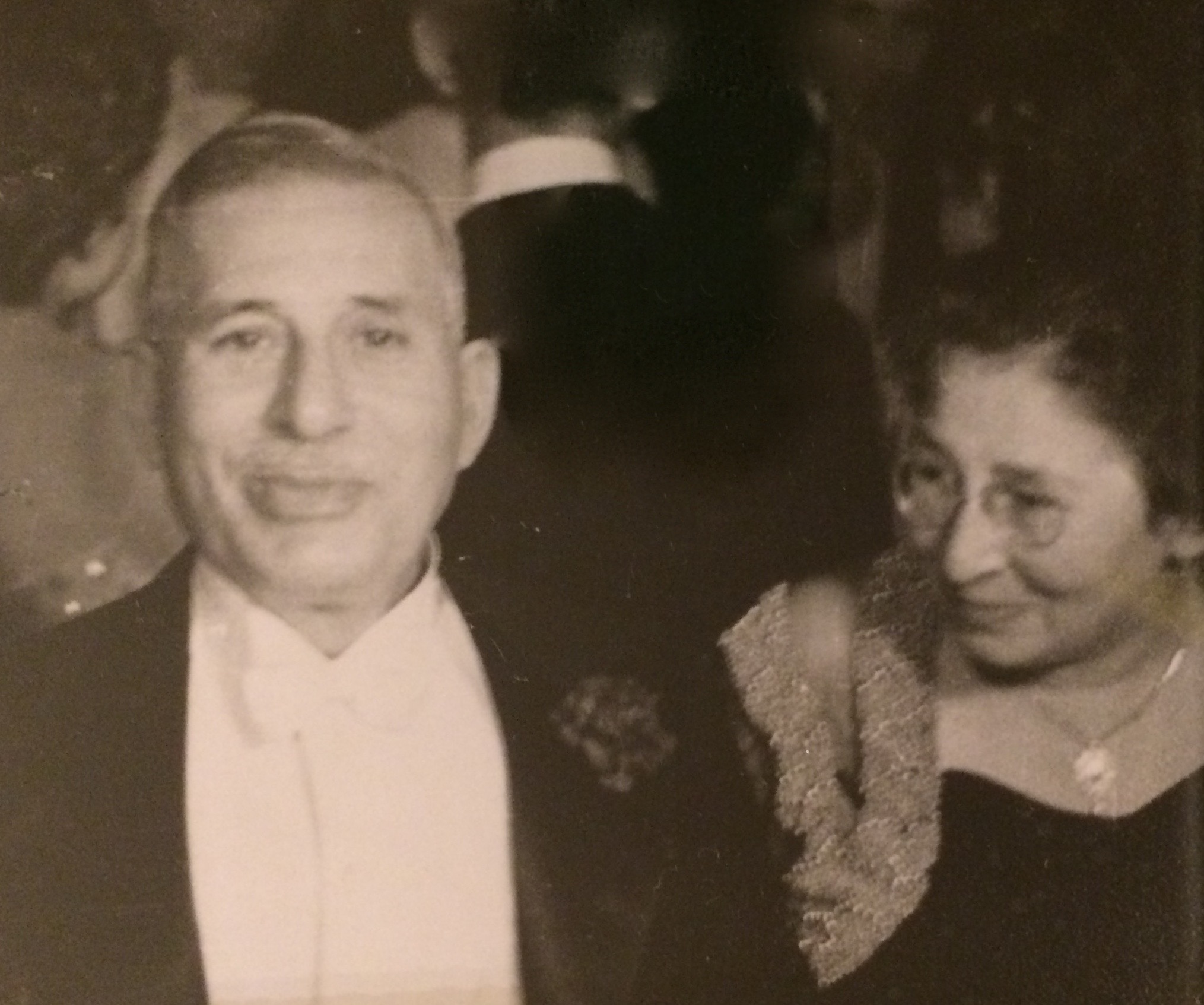 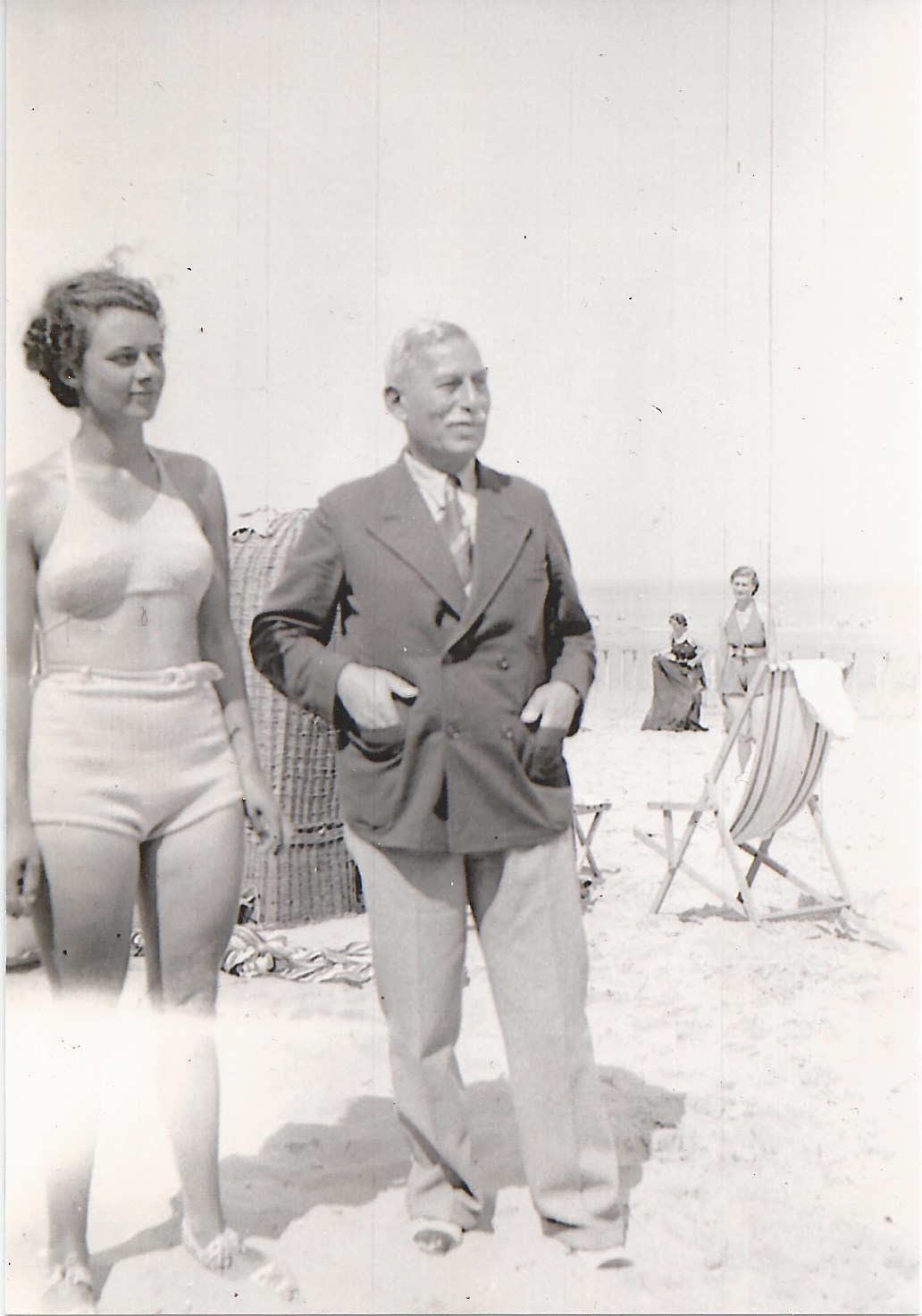 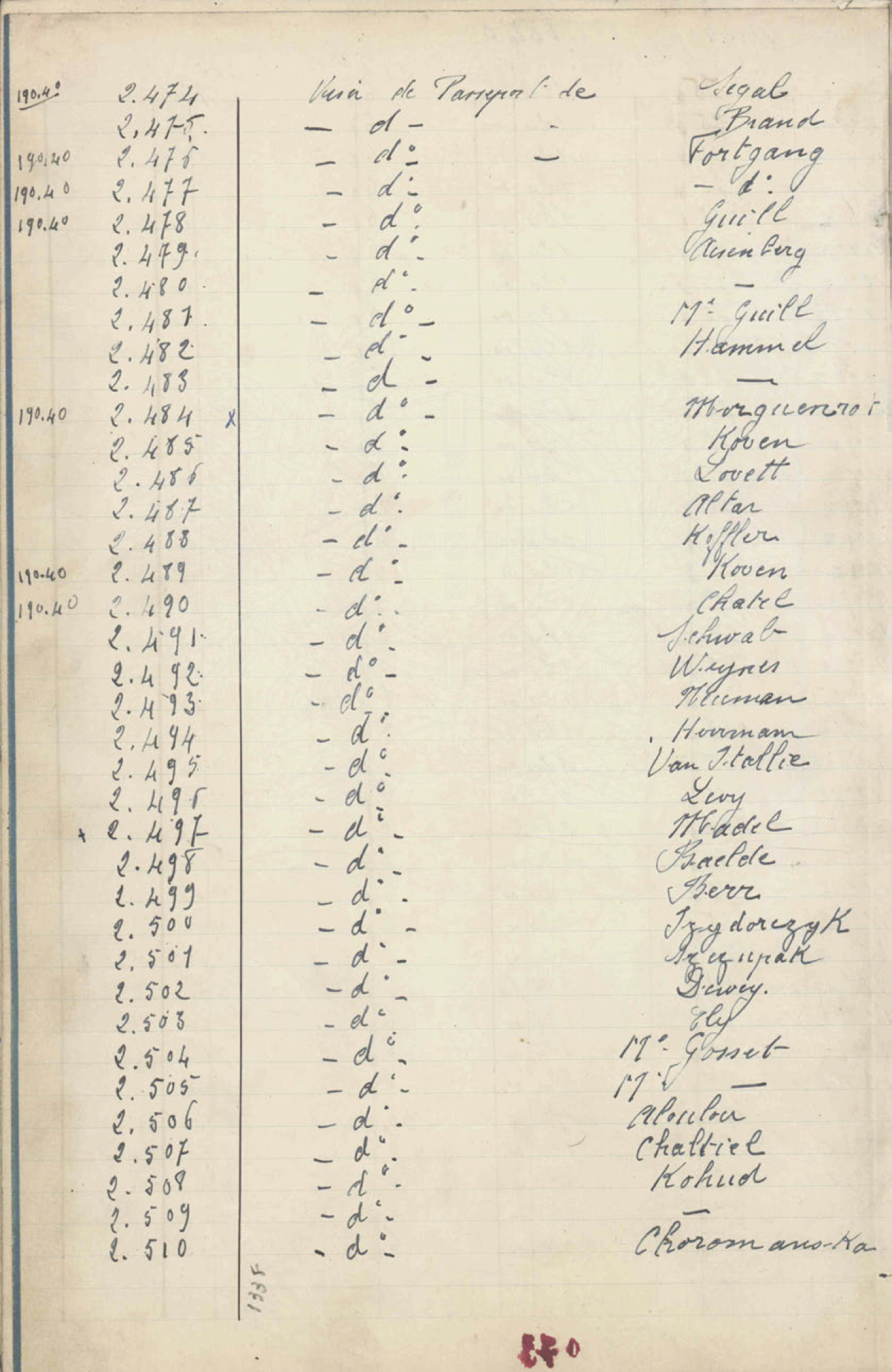 May 10, 1940 " The night is clear. At four-thirty in the morning the Nazis bombed Brussels. I wake. It's still dark. I'm scared. All by myself, I lower the side of my bed and step down. Anything in this room could turn into a wolf. I go into the living room. Mami is urgently packing. "What's the noise?" I ask. "The garage next door. They're fixing trucks." She's lying. I know there's something wrong. I wail.

We've heard of cars waiting four hours at the border so Marthe takes back roads where the wait is shorter. In France, we're surrounded by a miserable procession of women, old people and children pushing everything from wheelbarrows to baby carriages. Anything with wheels is on the roads. We're lucky to be in a car. On top of the cart, Jeanne sits waving to soldiers. Thanks to a farmer Leroy our first night in France is spent in his barn.

Traveling, Grandmaman writes, "Argenteau. Small village, small hotel " big homesickness. We leave by small roads. Marthe, a driver beyond praise, manages marvelously. Then, near the river Charente, our cart overturns and flies into a ditch! Our poor parcels are all over the road " our clothes everywhere covered with honey and jam. We worried this would happen, so, fortunately, we left Jeanne, our Madonna of the Cart, in Rouen. Again heaven protects us. A car stops. The driver, Jean Pairy, insists on helping. He puts our parcels into his car, making several trips. Finally he drives us to Fouras where he finds us excellent rooms." On the hotel balcony Grandmaman tells me, "Always remember you spent your fourth birthday in France."

On June 18th at five in the morning the van Itallies and Levys left Fouras by car for the port of Bordeaux. Grandmaman writes, "In Bordeaux Tilly and I wait in the car for Ferdinand to return from the Dutch Shipping Line. When he does, he tells us he's booked passage to England that very evening for himself and Tilly. My husband and I want to get back to Villeneuve before dark. The farewells are terribly emotional. Ferdinand and Tilly hug us, crying. Hughes wants to take Marthe and Bichon to England too. Will we see them tonight in Villeneuve or will they have gone?" The ship will board only Dutch nationals.

On the dock, I hold Mami's and Papa's hands. We watch the boat leave. Oma and Opa wave to us from the deck high up. I'm amazed a metal boat big as a mountain and high as a cliff can move on water. Later in life I often dream of a huge ship departing. "Wave to Oma and Opa," Mami says. I wave. We watch for a long time as the ship moving toward the horizon gets smaller and smaller. Oma and Opa are just dots now. I never see Oma and Opa again. Next day the boat hits a mine.

Grandmaman writes, "That night we wait at Villeneuve, terrified we won't see Marthe, Hughes and Bichon return. We're scared too because we're being seriously bombarded. At midnight our dear ones are here. I'm so relieved. My father says, "I couldn't book passage so I went to the Portuguese Consulate. I managed to get visas into Portugal by agreeing to bring along a thirteen-year-old boy named Jerry Brunell. Years later in New York he became editor of Aufbau, the Jewish German-language newspaper."

Grandmaman writes, "That same night we start out with Marthe, Hughes, Nelly, Bichon [Jean-Claude] and Jerry Brunell. The road is dark but we don't dare turn on the headlights. We tremble each time we hear a plane. After two hours we give up, stop the cars by a field. It's the first time we spend the night outdoors. We don't even think of sleeping." The day after our hurried departure, Grandpapa's sister Irma and her daughter Luce arrived in Fouras, hoping to join us. They'd had a grueling six-day journey from Paris, partly in a cattle car. In Fouras they were devastated to find nothing but two letters " one to Grandmaman from her sisters, and one to Jeanne from my mother. Irma and Luce had missed us. Low on funds, they returned to Paris where they received a little money from Uncle Emile who had fled to Nice. Ultimately Irma and Luce were deported, killed in Auschwitz.

My father says, "In Foix on the street I run into my friend Hubert, in the army like me. I complain to him, 'I can't get visas to drive through Spain.' Hubert informs me, 'The Spanish Consulate in Perpignan hasn't yet received orders from Madrid to stop issuing visas.' Thanks to Hubert's tip, I manage to get Spanish transit visas. And French exit visas. At the frontier near Perpignan a zealous Spanish customs officer accuses me of transporting an 'enemy alien' " Jerry Brunell. But then he looks more closely at my name on my passport, asks, 'Do you know anyone in Leyden?' I say, 'My uncle is Dean of the University there.' Then everything changes. The officer studied at Leyden."

On June 28th we reach Madrid. I'm amazed how much the city has been devastated by bombs. We see some flags with swastikas. At four in the afternoon we leave Madrid to arrive late in Merida... At dawn we leave for Lisbon. Hughes is making us dash across two countries at break-neck speed, so he can meet with David Van Buuren. When we arrive at midnight, Hughes finds his precious Uncle David and Aunt Alice have left for America in the last clipper plane from Lisbon. We can't find hotel rooms so we end up in a sixth rate private home in an eccentric part of town " but the people are nice."

July through September we stayed on the Portuguese shore in Estoril at the Pension Royale. Grandpapa wrote his glove manufacturing colleague in New York, Newton J. Rice, owner of Wear Right Gloves, for help in getting visas to the United States. Father worked at the Belgian Embassy in Lisbon. He asked permission to rejoin his regiment in England. A military doctor turned him down, declaring he was jaundiced, suffered from liver problems.

Though I never see a Nazi, fear is stamped into my nervous system, as if by osmosis, through my family. Since the Holocaust there's been a small current of anxiety that underlies everything. The Belgian Baroness Lambert stayed at the Pension Royale too, with her twelve-year-old son Leon. The Baroness has two large dogs on leashes. I'm scared of the brown dog. The black dog is so terrifying I hardly even see him. I throw apricot pits into the garden of the Pension. Grandmaman says, "Plant them in the potted palms. Then many years from now they'll be trees. You can come see them."

Thanks to Grandpapa's friend in New York, a telegram arrived at the American Embassy in Lisbon. "Give visas to Mr. Fernand Levy and his family." It was signed, "Cordell Hull, Secretary of State." Our lives were saved. On September 25th we boarded a Japanese ship to America.