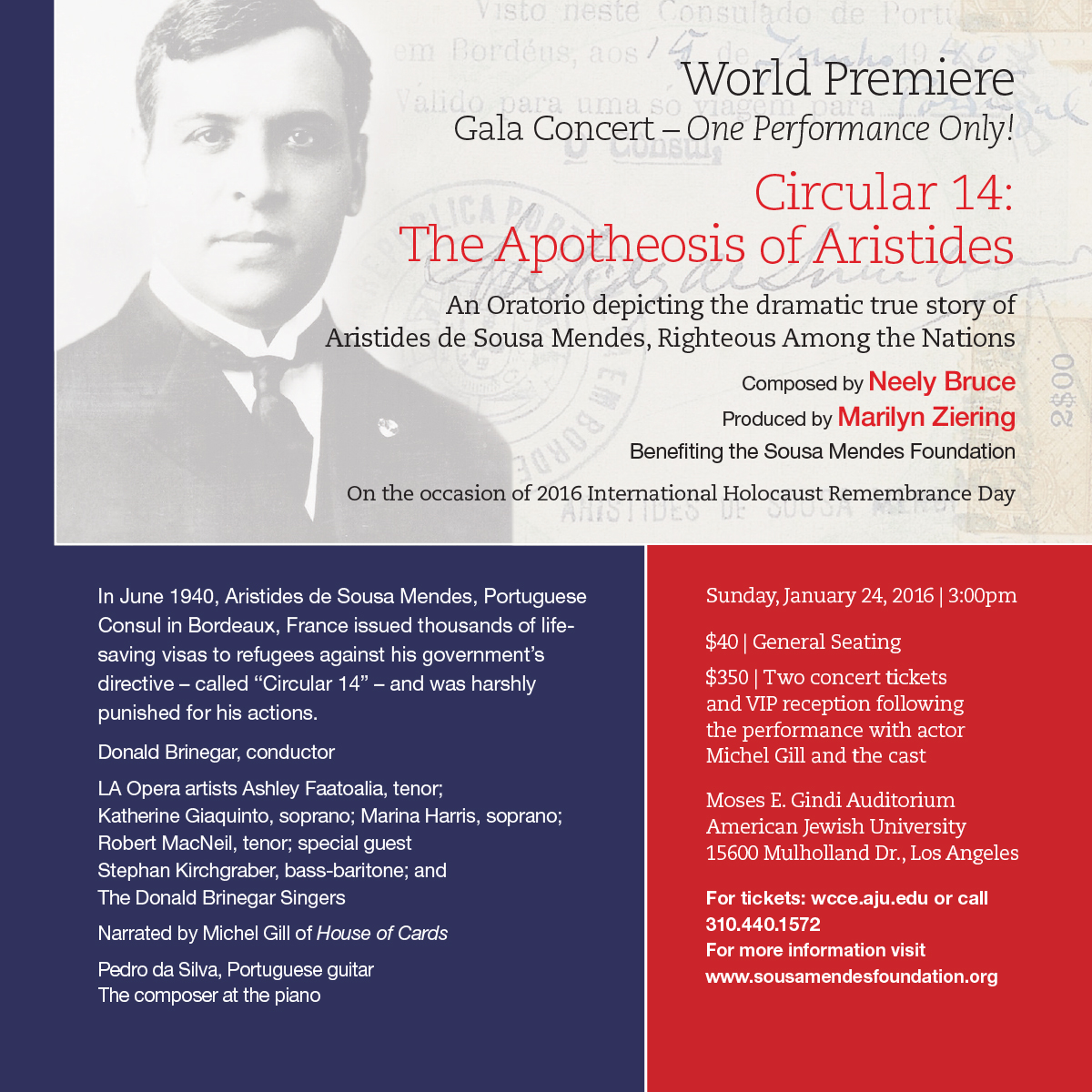 On Sunday, January 24, 2016, at 3:00 p.m., American Jewish University at 15600 Mulholland Drive in Bel Air, California will host the World Premiere of the dramatic oratorio Circular 14: The Apotheosis of Aristides by composer Neely Bruce, the John Spencer Camp Professor of Music at Wesleyan University. “Aristides de Sousa Mendes was one of the genuine heroes of the Holocaust, a diplomat whose deeds made all the difference between life and death,” said Dr. Michael Berenbaum, Director of the Sigi Ziering Institute at American Jewish University. “A musical presentation of the man provides us with a brilliant tool to understand human decency and to celebrate a man who acted with nobility and moral clarity,” he added.

Aristides de Sousa Mendes was the Portuguese Consul-General stationed in Bordeaux, France, during World War II. His government had issued strict orders to all its diplomats, in a document called Circular 14, to deny visas to Holocaust refugees seeking to escape Nazi-occupied Europe through Portugal. Sousa Mendes defied these orders and issued Portuguese visas to an estimated 30,000 people in May and June of 1940 in an operation described by the Holocaust scholar Yehuda Bauer as “perhaps the largest rescue action by a single individual during the Holocaust.” The rescued families ended up in the United States, Canada, Brazil, Israel, the United Kingdom and elsewhere across the globe and began new lives, while Sousa Mendes himself was put on trial by the Portuguese government for “disobedience” and was harshly punished. Some of the visa recipients were prominent, such as the artist Salvador Dalí and the authors of Curious George, Hans and Margret Rey. But most were ordinary families escaping the horrors of Nazi persecution.

Marilyn Ziering is the Producer of the concert, and tickets will directly benefit the Sousa Mendes Foundation. Soloists are LA Opera tenor Robert MacNeil in the role of Aristides, LA Opera soprano Marina Harris in the role of his wife Angelina, LA Opera tenor Ashley Faatoalia in the role of Salazar, Stephan Kirchgraber, a New York bass-baritone, in the role of Rabbi Kruger, and LA Opera soprano Katherine Giaquinto in the role of Aristides’s second wife, Andrée Cibial. The part of Aristides’s brother César, a spoken role, will be played by the actor Michel Gill of the hit Netflix series “House of Cards,” who is the son and grandson of Sousa Mendes visa recipients. The Portuguese guitar will be played by Pedro da Silva, the leading performer on this instrument in the United States. The conductor is Donald Brinegar directing the Donald Brinegar Singers, and the composer Neely Bruce will be at the piano. Ticket price: $40. Sponsorship package including two seats and VIP reception with Michel Gill and the artists: $350. Seating is limited. Tickets go on sale in December at wcce.aju.edu or by calling (310) 440-1572.

The Los Angeles Museum of the Holocaust (LAMOTH), 100 S. The Grove Drive, Los Angeles, is a Community Partner for the event and is presenting related programming, including an exhibition, two film screenings and a ceremony. “The Los Angeles Museum of the Holocaust is honored to exhibit original artifacts documenting the life of Aristides de Sousa Mendes,” stated Samara Hutman, Executive Director of LAMOTH. “The exhibit will be part of our Rescue and Resistance Gallery, which educates visitors about remarkable acts of courage and compassion by extraordinary individuals like Sousa Mendes in Nazi-occupied Europe,” she added. The schedule of events is below:

LAMOTH will host an exhibition of original Sousa Mendes visas and other objects related to the Sousa Mendes story. These artifacts come from the Sousa Mendes family as well as families that survived thanks to the diplomat’s help, and are being lent to LAMOTH by the Sousa Mendes Foundation. The exhibition, called Visas to Freedom: Aristides de Sousa Mendes and the Refugees of World War II, will tell both the general history of Sousa Mendes’s action and the specific story of his multiple ties to the State of California. Sousa Mendes served as Consul General of Portugal in San Francisco in the 1920’s, and two of his children were born in Berkeley. A number of visa recipients ended up in Los Angeles in the 1940’s and 50’s, including Rachel Rosenthal, founder of the dance company that bears her name, and the actor Hugo Haas. Several of his children moved to California in the 1960’s and lived there for the rest of their lives. In addition, the effort to have him recognized by the American and Portuguese governments began in California in the 1980’s with the help of House Majority Whip Tony Coelho (Central Valley), Pete Stark (Oakland), and Henry Waxman (Los Angeles) along with the organized Jewish community of the Greater East Bay. The exhibition will open on Friday, January 22, 2016 and will run until March 1, 2016. A reduced display will be on view thereafter. Admission is free.

11:00 a.m. With God Against Man – In June 2013, filmmaker Semyon Pinkhasov followed a group of Sousa Mendes visa recipient families, along with members of the Sousa Mendes family, as they embarked on a pilgrimage retracing their families’ footsteps of 73 years earlier. They were “searching for Sousa Mendes” – looking for traces of a lost history in an effort to understand their personal pasts. Tickets are $5 and are available at the door.

2:00 p.m. Disobedience: The Sousa Mendes Story – This French film with English subtitles, directed by Joel Santoni and starring Bernard Lecoq in the role of Aristides de Sousa Mendes, won Audience Choice Award for “Best Narrative Feature” at both the Los Angeles Film Festival and the San Diego Film Festival in 2014. Tickets are $5 and are available at the door.

LAMOTH will host a memorial ceremony and reception on Saturday, January 23, 2016 at 6:00 p.m. in honor of Aristides de Sousa Mendes. Among the speakers will be Sebastian Mendes, grandson of the diplomat, Dr. Lissy Jarvik, who received a visa in 1940, and Samara Hutman, Executive Director of LAMOTH. The event is by invitation only.

The Sousa Mendes events in Los Angeles are scheduled to coincide with International Holocaust Memorial Day, the anniversary of the liberation of Auschwitz. In addition, the year 2016 is significant as the 50th anniversary of Aristides de Sousa Mendes being recognized in 1966 as one of the “Righteous Among the Nations” by Israel’s Holocaust authority, Yad Vashem. It is also significant as the 30th anniversary of his being recognized by the United States and Portuguese governments in 1986. The Los Angeles concert, exhibition, ceremony and film screenings are marking all three of these milestones.

Los Angeles Museum of the Holocaust

LAMOTH is the oldest Holocaust museum in the United States. Founded in 1961 by a group of local Holocaust survivors who wanted a permanent, safe home for their Holocaust-era photos and artifacts, the Museum moved to its permanent home in Pan Pacific Park in 2010. LAMOTH dedicates itself as a primary source institution, commemorating those who perished, honoring those who survived, and housing the precious artifacts that miraculously weathered the Holocaust era. The Museum provides free Holocaust education to the public, including students from under-funded schools and underserved communities. The Museum’s programming has grown in community with local Holocaust survivors, many of whom helped found the Museum, and in partnership with schools, community organizations, artists, filmmakers and educators, through engagements that value dialogue, learning and creative reflection. www.lamoth.org