This program pays tribute to the woman who sheltered Anne Frank for three years and then rescued her now-famous diary. Miep Gies oversaw the “secret annex” where the Frank family was housed, while sheltering another Jewish person in her own home.  Meet Gillian Walnes Perry who knew Miep Gies well and accompanied her to the Academy Awards and Meeg Pincus who wrote a delightful book on Miep Gies for young people. END_OF_DOCUMENT_TOKEN_TO_BE_REPLACED 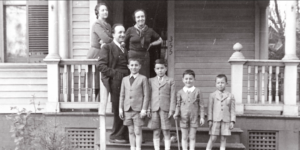 This program is about the exile of Italian Jews to America. Fleeing Mussolini’s racial laws, roughly two thousand Italian Jews landed in America in the 1930s and 40s. They didn’t fit in with either the Italian-American community or the Jewish-American community, yet many Italian Jewish refugees became leaders in their professions and productive contributors to American life.
END_OF_DOCUMENT_TOKEN_TO_BE_REPLACED