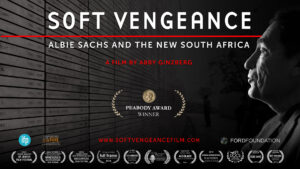 Albert “Albie” Louis Sachs is a South African attorney and activist who worked closely with Nelson Mandela in the struggle for democracy and human rights. After twice being detained for his anti-apartheid activities he was blown up by a bomb planted in his car by South African security services. He survived the assassination attempt but lost his right arm and vision in one eye. He played a key role in writing South Africa’s Constitution in the 1990s and served for fifteen years on its Supreme Court.  Meet this Jewish hero of South African democracy who will be with us in person! END_OF_DOCUMENT_TOKEN_TO_BE_REPLACED 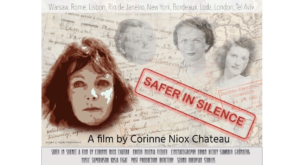 Safer in Silence is a personal journey made over thirty years and across five continents. Corinne Niox Chateau searches for the truth of her family’s Polish past in order to understand her mother’s distance. Uncovering her family’s hidden Jewish roots, Corinne is pulled into a complex story revealing startling truths that force her to face the patterns of hiding and secrecy that have profoundly affected her life. Corinne’s grandfather, the Polish diplomat Clement Skalski, was a close friend and colleague of Aristides and Cesar de Sousa Mendes, and it was Aristides’ visa that saved the Skalski family and enabled them to escape to America. Meet the filmmaker, who will be in dialogue with the celebrated film historian Annette Insdorf. END_OF_DOCUMENT_TOKEN_TO_BE_REPLACED

The Lady in Gold: The Remarkable Story of Klimt’s Nazi-Looted Painting and its Recovery

Portrait of Adele Bloch-Bauer I (also called The Lady in Gold or The Woman in Gold) is a painting by Gustav Klimt. The portrait was commissioned by the sitter’s husband, Ferdinand Bloch-Bauer, a Jewish banker and sugar producer. The painting was stolen by the Nazis in 1941 and displayed at the Galerie Belvedere in Vienna. After a seven-year legal claim, which included a hearing before the US Supreme Court, an arbitration committee in Vienna agreed that the painting had indeed been stolen from the family and should be returned. Meet the American journalist Anne-Marie O’Connor who first broke the story to US audiences. She will be in dialogue with Hannah Lessing, an expert on Austria and the Holocaust. END_OF_DOCUMENT_TOKEN_TO_BE_REPLACED

This program pays tribute to the woman who sheltered Anne Frank for three years and then rescued her now-famous diary. Miep Gies oversaw the “secret annex” where the Frank family was housed, while sheltering another Jewish person in her own home.  Meet Gillian Walnes Perry who knew Miep Gies well and accompanied her to the Academy Awards and Meeg Pincus who wrote a delightful book on Miep Gies for young people. END_OF_DOCUMENT_TOKEN_TO_BE_REPLACED 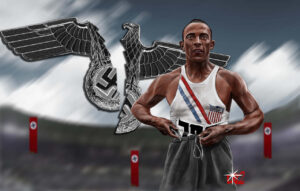 Jesse Owens, the son of Alabama sharecroppers, was the Olympic champion who defeated Nazi ideology in Hitler’s stadium. He later served on the Board of the National Conference of Christians and Jews. Meet his grandson, Stuart Owen Rankin, who will be in dialogue with Lori Weintrob, historian and Director of the Wagner College Holocaust Center. Representing the International Olympics Committee on the panel is Anita L. DeFrantz, a US Olympic medalist and Vice-President of the IOC. END_OF_DOCUMENT_TOKEN_TO_BE_REPLACED

The Legacy of Aristides 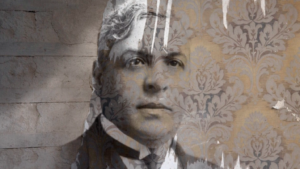 “Mrs. Judy” – The Canadian Woman Who Secretly Rescued the Jews of Syria 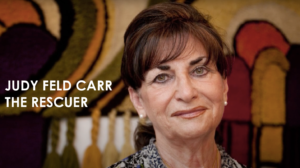 On this Chanukah program we honor Judy Feld Carr, a woman of exceptional courage and valor who chose to make a difference. Over a 28-year period, she secretly brought to freedom 3228 Jews prohibited from emigrating from Syria. Working with smugglers and bribing government officials, she removed most of that community from veritable bondage. In addition, she clandestinely smuggled out of that country priceless ancient articles of Jewish worship. Until Prime Minister Yitzhak Rabin and the Israeli Intelligence Organizations publicly acclaimed her activities, the world, including the Jewish world, had no inkling of this Canadian Jewish woman’s covert life. She is the subject of historian Dr. Harold Troper’s The Rescuer, now in its second edition. The rescue was the best-kept secret in the Jewish world. END_OF_DOCUMENT_TOKEN_TO_BE_REPLACED