The BUCHSTAB family received visas signed by by Emile Gissot, the Portuguese consul in Toulouse acting under instructions from Aristides de Sousa Mendes, on June 20, 1940.

They crossed into Portugal in July 1940 and traveled from Lisbon to New York on the vessel Nyassa in April 1941. 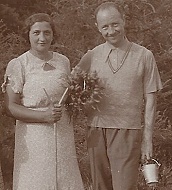 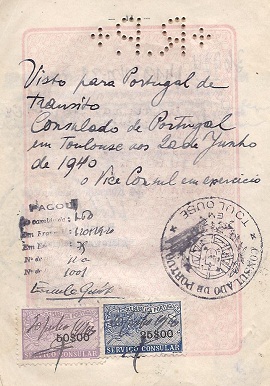 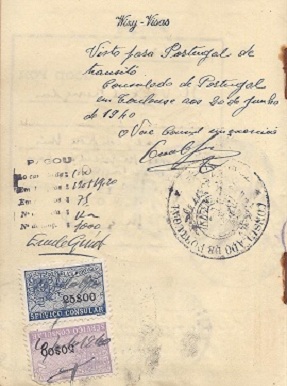 In May 1940, as the Germans had already invaded the Netherlands and Belgium and were approaching northern France, my mother and I took the last train leaving Lille for Paris with one small suitcase each. My father worked for Etablissements Kuhlmann, a company that had been requisitioned by the French government, and could not leave with us. Nonetheless, he had his bicycle packed and ready to flee at a moment's notice. Twelve hours after my mother and I left, my father woke up and saw a truck with his company's logo on it in the street, and was told that the Germans had arrived in Lille, and he should leave. He locked the apartment, jumped on the truck, never to return.

My mother and I went to his company's office in Paris and told them we were heading for Rennes. My father rejoined us there. While we were in Rennes, Paris was taken. We fled to Grenoble by train, where my father went to work at the Kuhlmann plant there. We rented an apartment, I started school, and we lived there for a few weeks, maybe a month. Then my father felt it wasn't safe and sent my mother and me to live with friends in Toulouse. When things started heating up near Grenoble, my father decided to come join us on the same day that my mother had bought tickets for us to return to Grenoble to rejoin him... fortunately, he arrived before we left... no texting back then!!

While in Toulouse, my father heard rumors that people were exiting France through Spain into Portugal. Since public transportation was no longer available, he hired a taxi to take the 3 of us from Toulouse to Pau to obtain exit and transit visas to enable us to leave France, cross Spain and enter Portugal. We arrived in Pau in the morning, and he immediately went into the consulate to wait in line to request a visa. My mother and I had strict orders to stay in the taxi, not to leave the cab until he came back. At closing time, when those people still in line were told to return the next day, my father hid in the bathroom.... When he heard the cleaning people, he came out, found the office of the consul (I have no idea who this was), and got on his knees to beg for his family's exit visa.... which he received. The taxi then took us to the border at Hendaye where we walked across the bridge and spent the night in a crowded hotel lobby on the Spanish side of the border. We got on a train the following day that took a very long time with little food... my mother would go find some (bad) dark bread every time the train stopped... this was the only type of bread available in Spain at that time, I believe.

We left Portugal in April 1941 on the Nyassa, bound for New York City. After some time in New York City, we settled in Fort Worth, Texas, where my father found work with Premier Oil and Refining Company. We began our new life there.