They crossed into Portugal, where they lived in Figueira da Foz. They subsequently sailed on the Serpa Pinto from Lisbon to Jamaica in January 1942. Yvonne KRAKOWIAK died in Jamaica at the age of 4, and the rest of the family continued on to the United States and changed the family name to ARNAY. 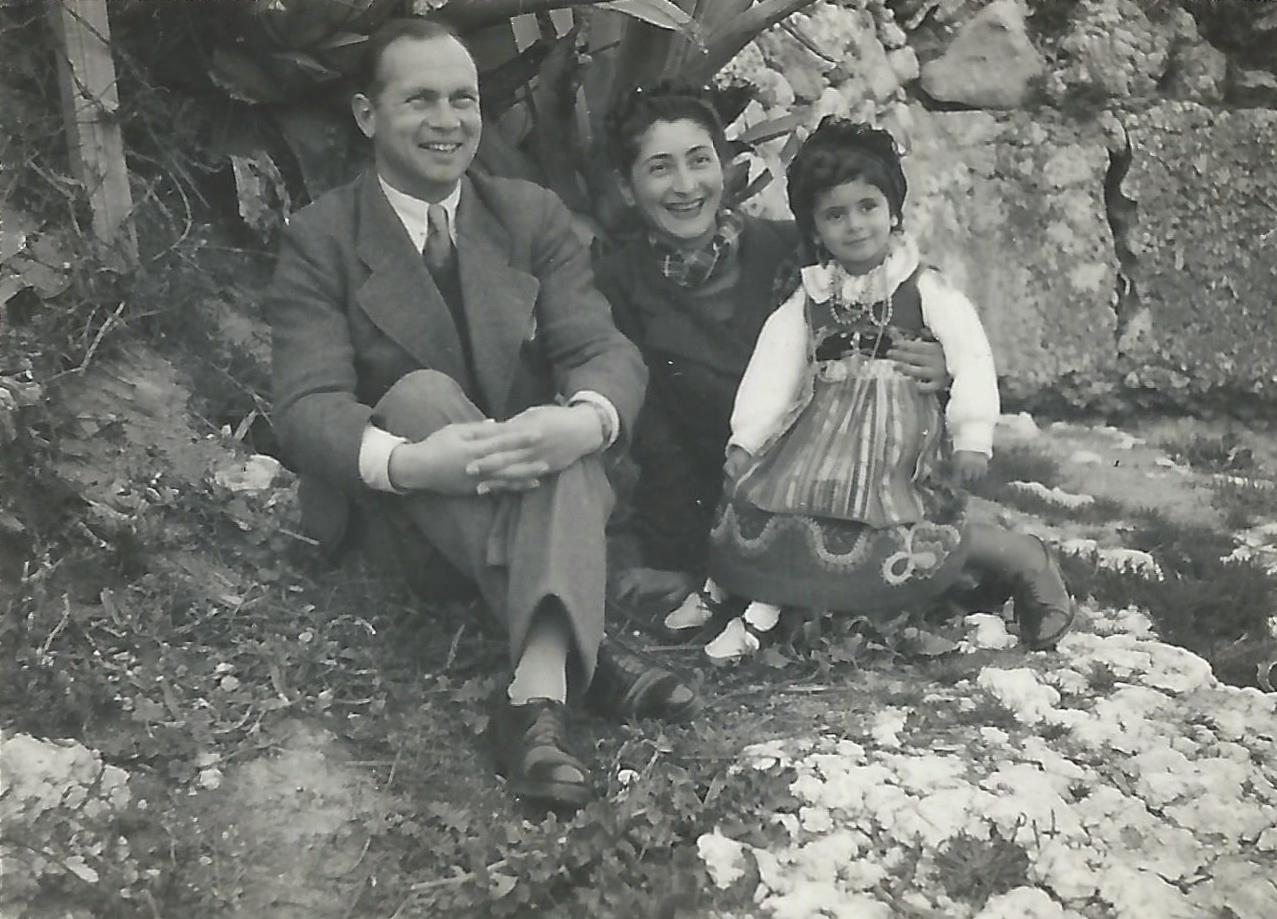 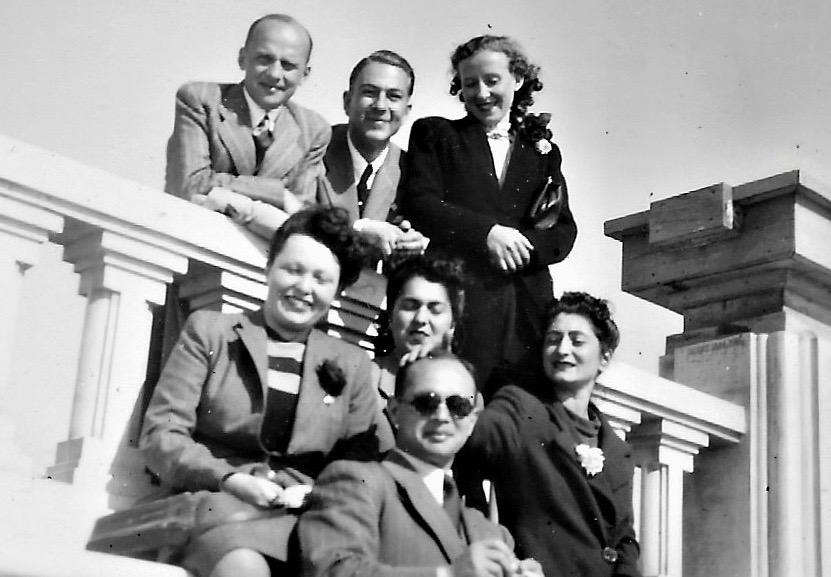 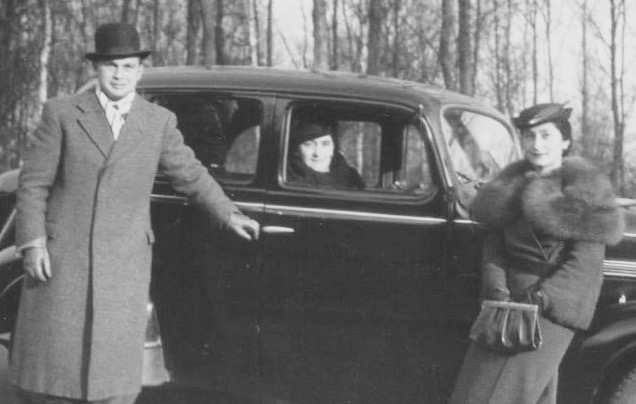 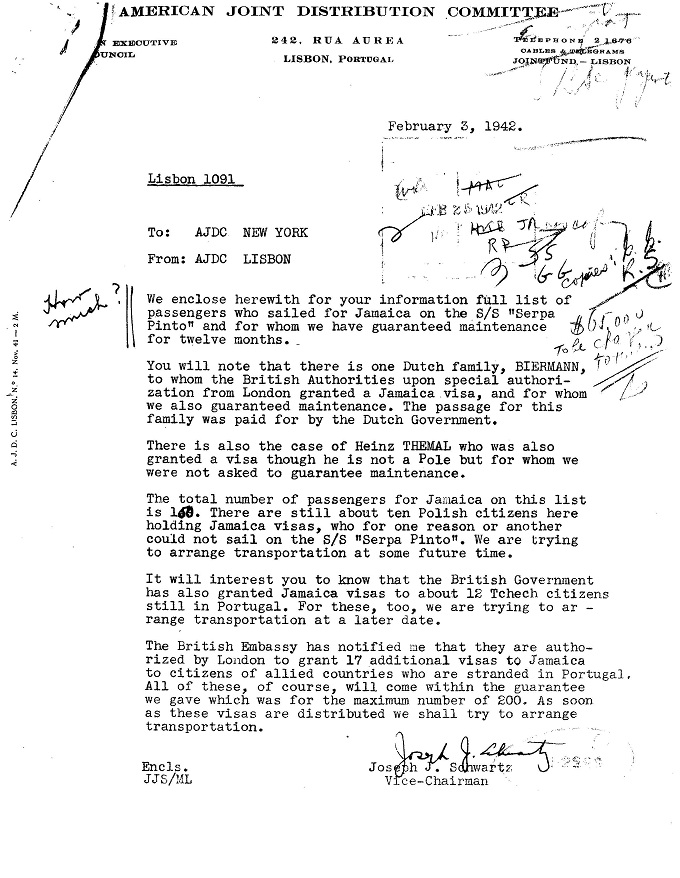 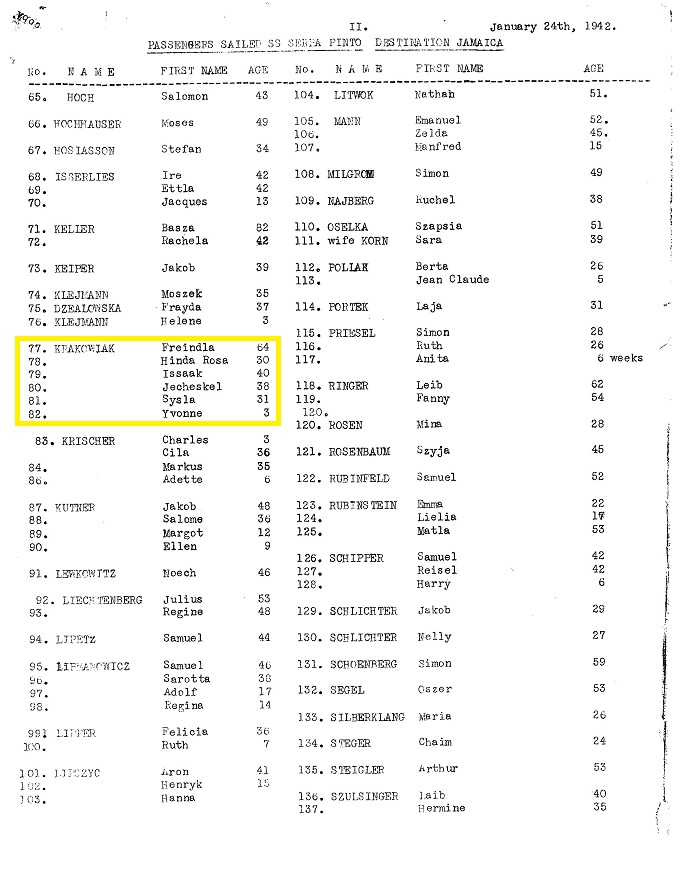 based on interviews with Hinda and Zysla

Julia KRAKOWIAK née TENENBAUM was the widowed mother of seven children; six boys and a girl. Her elder sons: Isac, Jecheskiel, Henryk and Jakob (and Joseph who was not one of the Sousa Mendes visa recipients) had all been living and working in Brussels, since 1925. In the summer of 1939, Julia was visiting her sons in Brussels, as was her habit. George, her youngest son, wrote to her and told her not to come back to Warsaw, because it wasn't safe. (Both George and Paula, the youngest child and only daughter, survived the war in Russia, returned to Poland and finally emigrated to Israel in 1956.)

Days after the May 10th, 1940 blitzkrieg of Belgium, both the Isac and Jecheskiel KRAKOWIAK families including Julia their mother, packed up their most important belongings and started their journey from La Panne, a small town on the Belgian sea coast. The six of them were crammed into the 1933 Mercedes that Isac had bought from Henryk when Henryk left Belgium. (Henryk had read Mein Kampf, and he was convinced that Hitler was a threat to their existence.) They drove without any real destination in mind, just knowing that they needed to get as far away from the bombing as possible.

Their route took them over the bridge at the Yser Canal, which was on the route to Dunkirk, and passed through the town of Poperinge. It must have been just before the 27th of May, when the Luftwaffe bombed the traffic jam at the canal and wiped out the bridge, and the subsequent Luftwaffe raid — on the night of 28/29 May — which illuminated the night sky from flares as well as the light from burning vehicles (http://en.wikipedia.org/wiki/Battle_of_Dunkirk). Both my mother Hinda Rosa (Hala) and my aunt Zysla (Sophie) told me that they were constantly moving just ahead of the bombings. My aunt recalls seeing the red sky over Dunkirk burning from the rear window of their car.

They drove through France by day on clogged country roads and slept in abandoned farm houses or in their car. Sometimes they hid their car under haystacks at night to avoid having the French police confiscate it. Sometimes Isac (Ignace) helped farmers in the fields in exchange for food. My mother cannot remember how she took care of the toileting needs of their one-and-a-half year old baby.

They arrived in Bayonne and heard that the Portuguese Consulate was giving out visas for a safe haven in Portugal. Sophie remembered that the "Ambassador" (probably de Sousa Mendes) came out on the balcony and spoke to the crowds of people reassuring them that they would all receive papers for safe transit. The KRAKOWIAK family got papers to go to Figueira da Foz from this benevolent benefactor, but never really knew his name.

They lived in Figueira da Foz, Portugal supported by the Polish government-in-exile in London and the Joint from June or July 1940 to January 24, 1942. In addition to the monetary support received from the agencies mentioned, my mother told me of the generosity of the Portuguese people who took a great interest in the refugee families. Each family had a "benefactor." Our family owes a great debt to Alberto Malafaia, who befriended them. Every day they would congregate in the café and listen to the news on the radio. The casinos were open, and the refugees were invited to come in to dance and socialize for free. She also mentioned the Portuguese children of the neighborhood who took a great interest in my sister Yvonne, who was just two years old when they arrived in Portugal.

During this time in Belgium and Portugal, Hala was able to have sporadic contact with her family in the Warsaw ghetto. She received postcards from the government and sent them packages.

By the time the family boarded the Serpa Pinto in Lisbon on January 24, 1942 headed to Camp Gibraltar, Kingston, Jamaica, BWI, little Yvonne who was then three years and eight months old spoke Portuguese, French and Polish.

The Isac and Jecheskiel KRAKOWIAK families lived in Camp Gibraltar from January 1942 to early October 1943. Yvonne died a short time after arriving at the camp. She was buried in the Children's Cemetery of the Israelite community of Kingston, Jamaica, BWI; she was four years and three days old. Her death certificate lists meningitis and tuberculosis as the causes of death.

Henryk KRAKOWIAK (age 42), his wife Janina KRAKOWIAK (age 39), and son Oscar KRAKOWIAK (age 12), along with Jakob/Jacques KRAKOWIAK (age 41) left Europe in 1938-9 before the war broke out. They went to Cuba and subsequently sailed from Havana to New York on the ship Oriente in November 1940. I don't know when they went through Portugal to Cuba; Oskar would never talk about their experience. Julia was given a special visa as the mother of Henryk who had already established himself in New York a short time before.

The KRAKOWIAK family changed their name to ARNAY on becoming naturalized American citizens. They led very productive and happy lives in their new home. They never spoke about the tragedy that had befallen them until about 1956, when at the age of eleven I started to ask questions and even then the answers were very short and grudgingly given until 1993, when the barrier crumbled in the wake of Schindler's List.

The ARNAY (KRAKOWIAK) family are buried in a family plot at the Mount Hebron Cemetery in Queens, NY.