The ROSENTHAL family is presumed to have received visas from Aristides de Sousa Mendes in June 1940.

They crossed into Portugal, where they resided first in Figueira da Foz and then in Luso. They traveled from Lisbon to Brazil on the ship Bagé in September 1940 and subsequently sailed from Rio de Janeiro to New York on the vessel Argentina in April 1941. 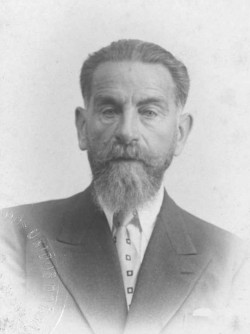 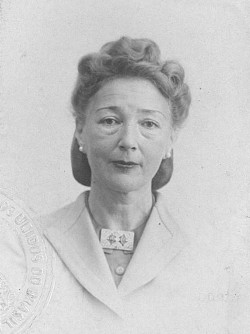 My parents were born in Russia. They were Russian Jews. My father, Leonard Rosenthal, was born in the south. My mother, whose maiden name was Maria Jacobovitch, was born in the north, in Riga in what's now Latvia. My father was twenty years older than my mother.

He came to Paris - he went west, young man - from Russia when he was 14 - he didn't even speak French. And my mother came all the way down from the north to the south in order to leave Russia when the Bolshevik revolution came. So they both ended up in France, in Paris, and they fell in love around 1920.

They married when I was seven years old - I was born out of wedlock because my father's first wife didn't give him a divorce. We were a very affluent family - my father was an importer of precious stones and pearls - and a very well known family of what was called then, 'assimilated Jews.'

By the late 1930s, we were very much exposed to the worst that would happen through the [Nazi] Occupation.

My father didn't want to leave France - he thought it was traitorous to leave the place that had given him his fortune and his life and everything.

But at the last moment, in 1940, we had to go and we crossed the border into Spain. We had tried to get out with more members of our family. Every time we went to the frontier, it was blocked, it was closed, we couldn't all get out.

My father finally said, 'Let's try again, just the three of us.' And we went through like nothing was wrong.

We stayed in Spain for approximately three days, waiting in a small mountain border village, for a smuggler to bring out my mother's jewelry in a little box, over the frontier.

But that didn't work out. Because the Germans were all there, the army was already there, all over the border, waiting to come into France. And sure enough, we left and that afternoon the swastika was on our villa.

The jewelry never came, and then we went by train to Portugal with the idea that we would end up in Lisbon and get visas to go to the U.S.

Well, that didn't work out. At first, we couldn't get into Lisbon. Because it was so full of refugees and they refused people coming in from trains or anywhere else. They would reroute them to three choices of another city or town or village - and we ended up in a little spot called Luso. There was a beautiful, beautiful forest called Buçaco that was filled with hydrangeas.

We ended up there because my father asked the train conductor, 'If you had to choose between these three, where would you go?' and the conductor said, 'Oh, I'd go to Luso.'

So we ended up there. We spent three months trying to get exit visas. My father and several other refugees - also Jewish men with their families - rented a jalopy and every second night they would spend the whole night traveling to Lisbon. They would spend the day there going to all the consulates trying to get exit visas. Then they'd come back to Luso in order not to spend the night in Lisbon, which was not allowed.

I was thirteen years old and enjoying myself. This was the first time I'd lived in a place like that - a little village. It was quite wonderful.

Meanwhile, our visa for staying in Portugal was coming to an end. We were then supposed to be sent back into France - where we would probably end up in a concentration camp and be killed.

So my father is sitting in the Brazilian consulate's waiting room, waiting to talk to the consul to try to get our exits, and a guy passes by who happens to be the French ambassador to Portugal.

And he looks at my father and says, 'Leonard, what are you doing here'? My father knew all these people. And so through the ambassador we got our visas and were on the next boat to Brazil, called the Baje. We ended up in Rio de Janeiro. We stayed ten months.

We had no money left, because we didn't have the jewelry to make money and because my father was one of the few people who didn't have money in foreign banks, again because of his idea of patriotism - 'We don't take it out of France.'

My father began to know people because we had been written about in the papers - 'Leonard Rosenthal and his family are here, blah blah blah.' So my father got entry into all these political places and money places and all of that.

So we were continuing our lives, thinking we were settling in Brazil. And then one day, the American consul called my father.

Little by little, it turned out that the Jews who were coming to Brazil from Europe and wanting to establish themselves there were either sent to prison or disappeared. Unbeknownst to anybody in the world, the Nazis had taken over the government in an underground coup.

Our past overtures to come to the U.S. hadn't turned out because my mother's hometown in Riga had been taken over by the Bolsheviks who dissolved the consulate there so we couldn't access her records needed to emigrate.

But the U.S. consulate began to know what was going on in the Brazilian government. The consul called and said to my father, 'Just between you and me, off the record, leave the country. There is a boat going to the U.S. in four days. Be on that boat.'

We boarded that boat in Rio. We passed the equator one more time, stopping in Bahia, Trinidad, all these interesting Caribbean places, and one week later, we ended up in New York.