He crossed into Portugal, where he resided in Figueira da Foz. In December 1940 he sailed on the vessel Siboney from Lisbon to New York. 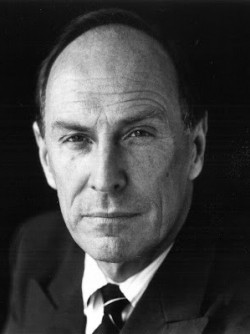 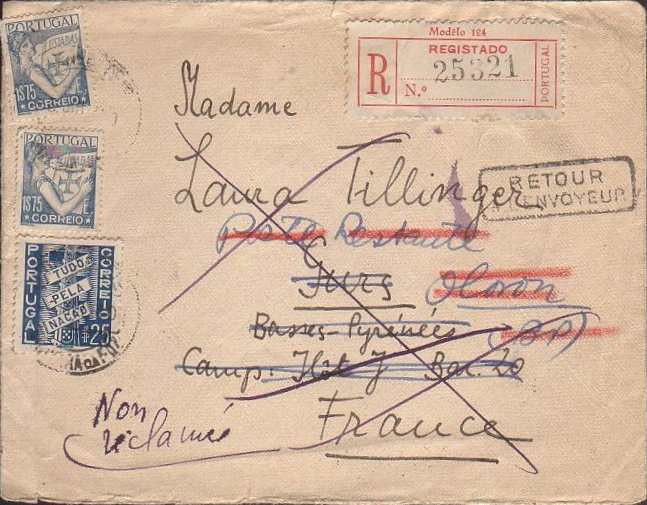 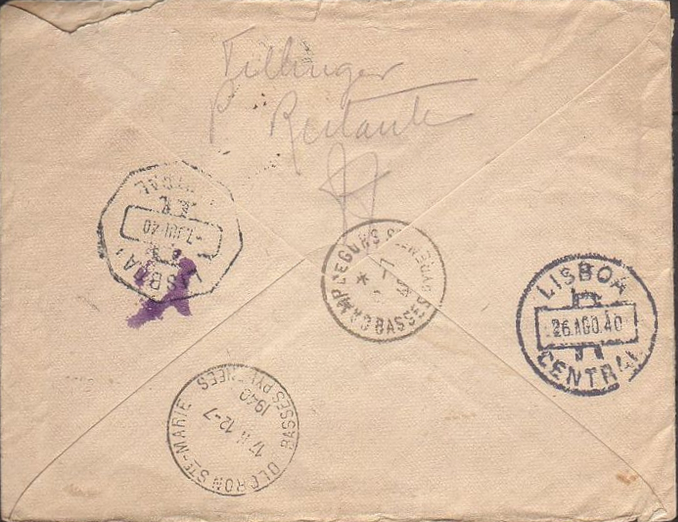 Reverse side of same envelope showing sender and cancellation stamps 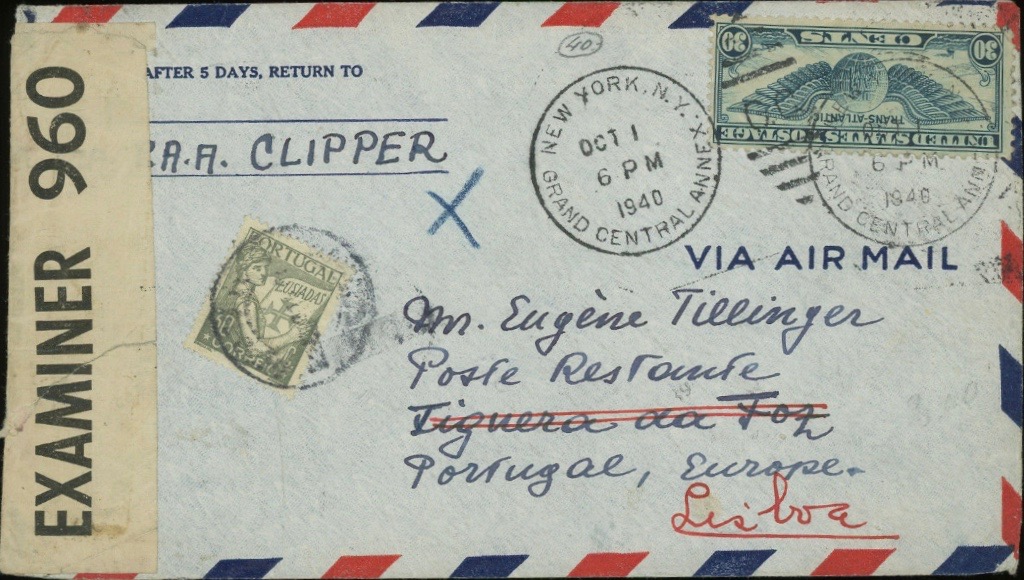 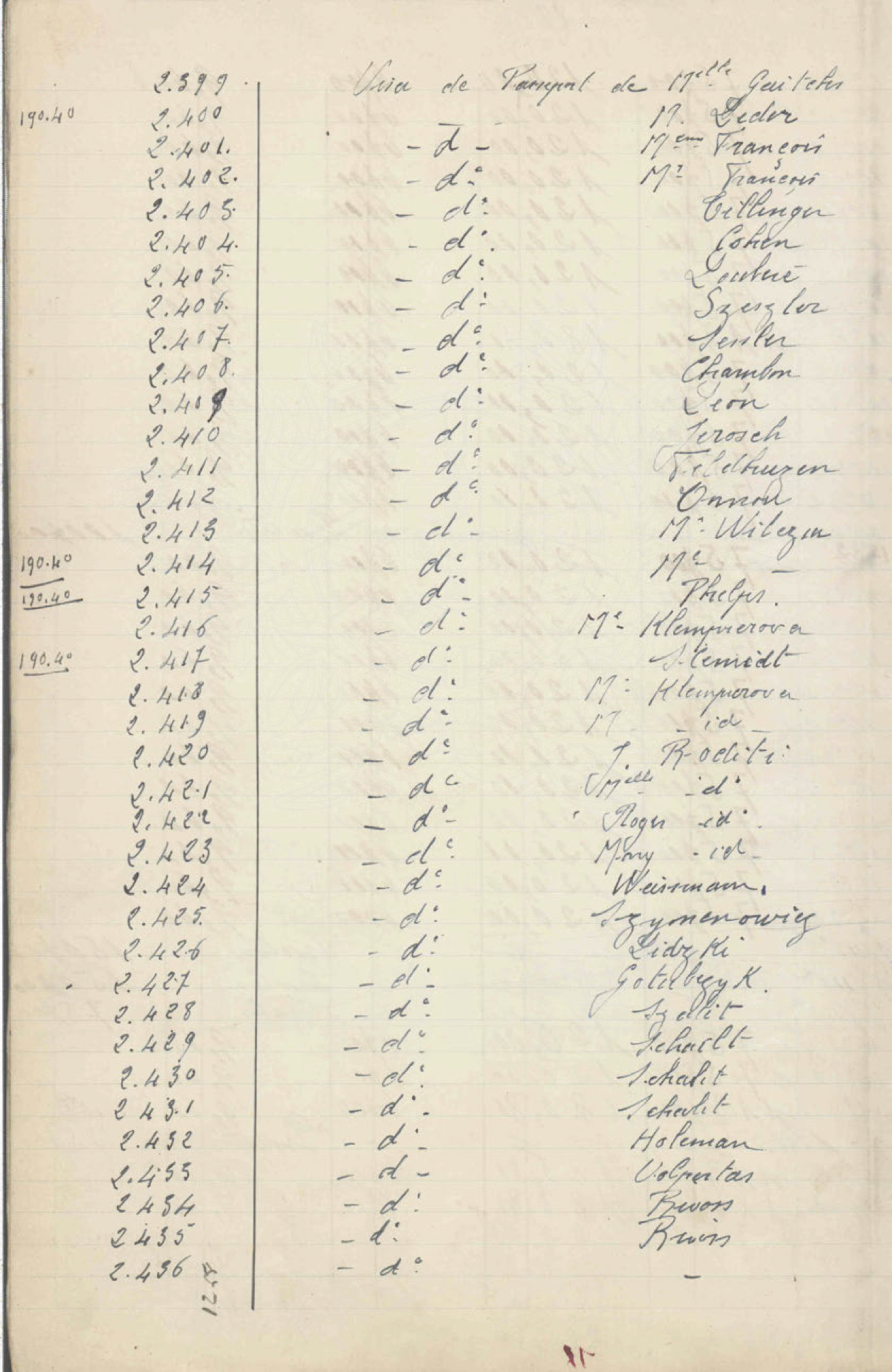 The Bridge of Hendaye: Eyewitness Account of the Mass Flight to Spain

And now people are standing in line before the bridge. Before the bridge that has often been mentioned in the world press, before the famous bridge at Hendaye. Just a few meters ahead of us, the tricolore still flies. The French officials are unusually friendly. And barely a hundred meters away lies Spain. We hear the radio: the German troops are advancing, the cease-fire was signed yesterday. Many people are growing impatient and believe that the border could be closed any minute. One man, who is sent back because his papers are not in order, has a crying fit.

It is 1 p.m. now, and our turn has come.  All the formalities are done.  We walk the few steps toward the French border barrier, show the official a white slip of paper; he takes it, says "merci" one last time, and gives a signal with his hand.  The barrier rises slowly....  One step and we are no longer in France.  Just a few more steps....  We look behind us, standing still here in no-man's-land for a moment, quietly.  We think back with melancholy:  Adieu, France....  Glorious, beautiful France!  Why did it have to come to this?  Why?

Slowly we walk toward the opposite end of the bridge.  A lively dispute abruptly rouses us from our dreamlike state.  What has happened?  ...  A few seconds later we catch sight of a man talking insistently to the Spanish officials and gesticulating energetically.  The discussion grows louder and louder.  It is clear:  the Spaniards are unwilling to let the man pass through.  In vain, he shows his visas, his diplomatic passport... nothing helps.  Mr. Titulescu, the Romanian Foreign Minister, is not allowed to pass.  He has to go back.  Back to France.

And 24 hours later, as we arrive at the Portuguese border, the swastika flag is already flying at the Hendaye bridge.

You've come from Lisbon? Do tell!

When you run into friends and old acquaintances just after you've arrived in New York, people you haven't seen in years, the same question is repeated every time:  "You've come from Lisbon??  Tell us about it!"

What should one say in reply?  That the mood among the refugees is not exactly rosy?  That only a relatively tiny fraction of them have a chance of getting US visas?  That the news arriving from France is getting worse by the day?

It is important to give some advice to those who still have loved ones in Portugal and France:

Concerning food parcels that can be sent from Lisbon to France, I would suggest sending only small, 500-gram "sample without commercial value" parcels, because the others rarely reach their destination.  Any grocery store in Lisbon will arrange for the shipping.

Anyone wishing to send sums of money to loved ones living in the unoccupied zone should do this directly through a bank, ideally by wire, even if it costs a few dollars for the charges.  Avoid a more complicated payment transaction, because the French authorities require the German and Austrian emigrants, even the women, to provide detailed proof that they have money available or that they really are getting money from America.  But this proof, which in many cases can save a refugee from being re-interned in a camp, is valid only if one can produce a receipt from a French bank.