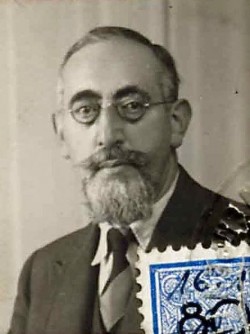 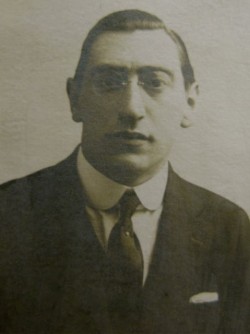 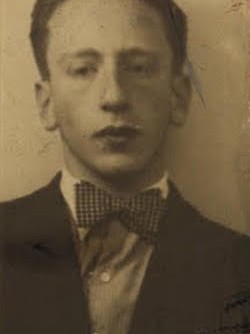 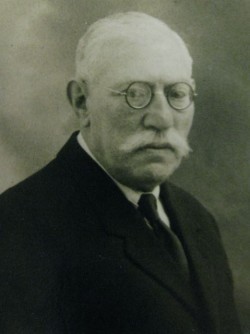 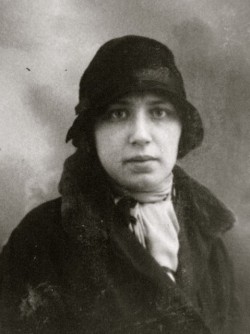 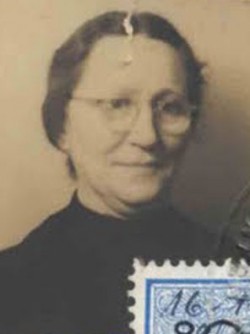 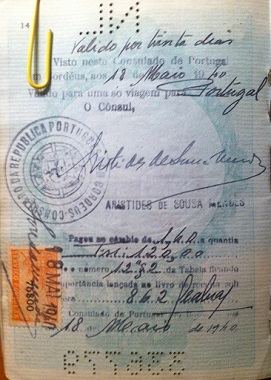 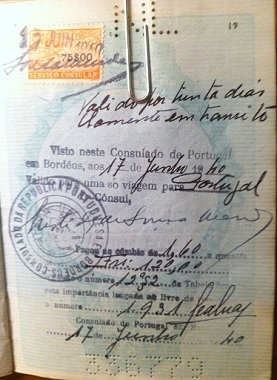 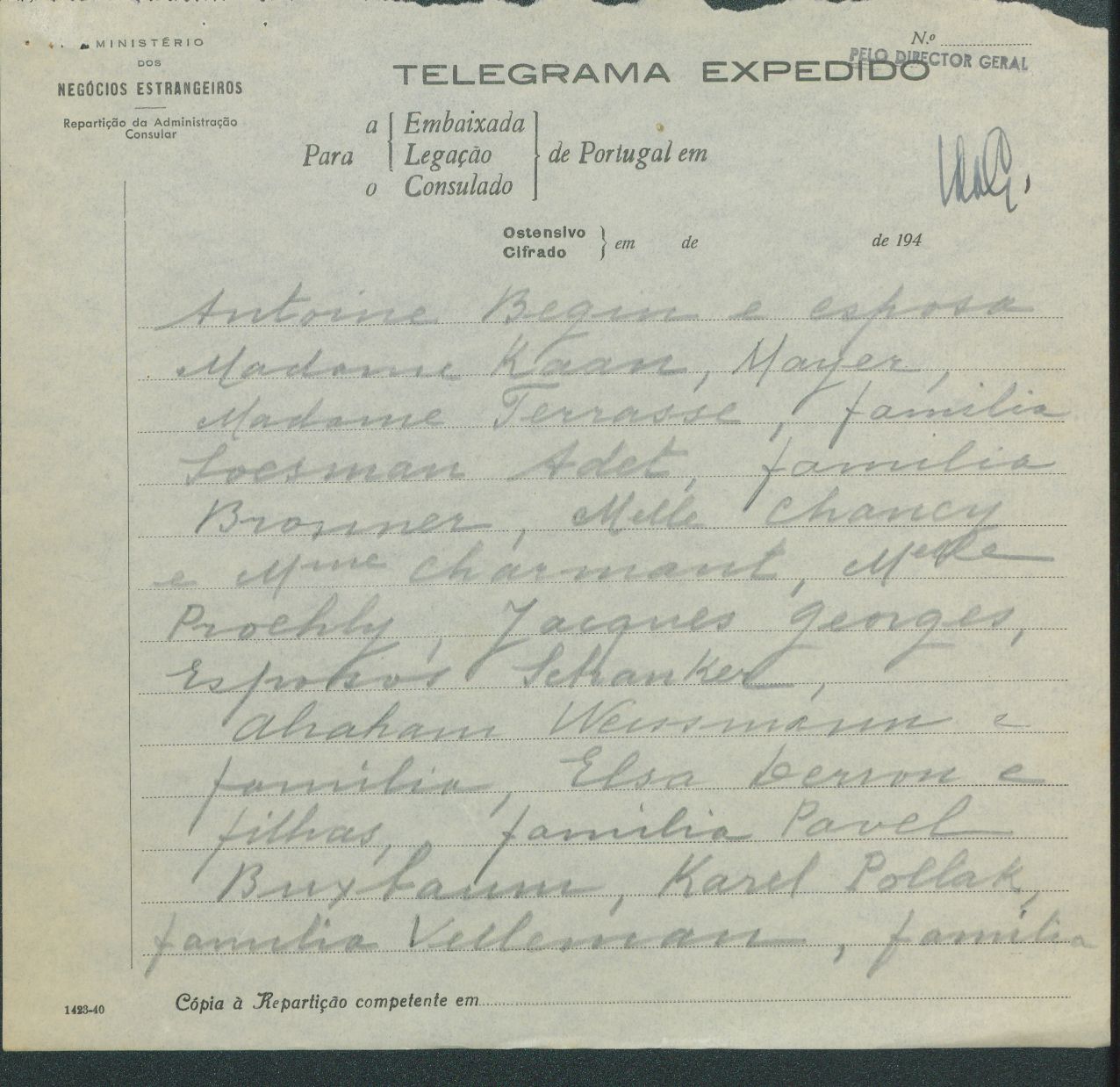 Telegram from Salazar denying visas to the VELLEMAN family - Courtesy of the Portuguese Ministry of Foreign Affairs archives, Lisbon 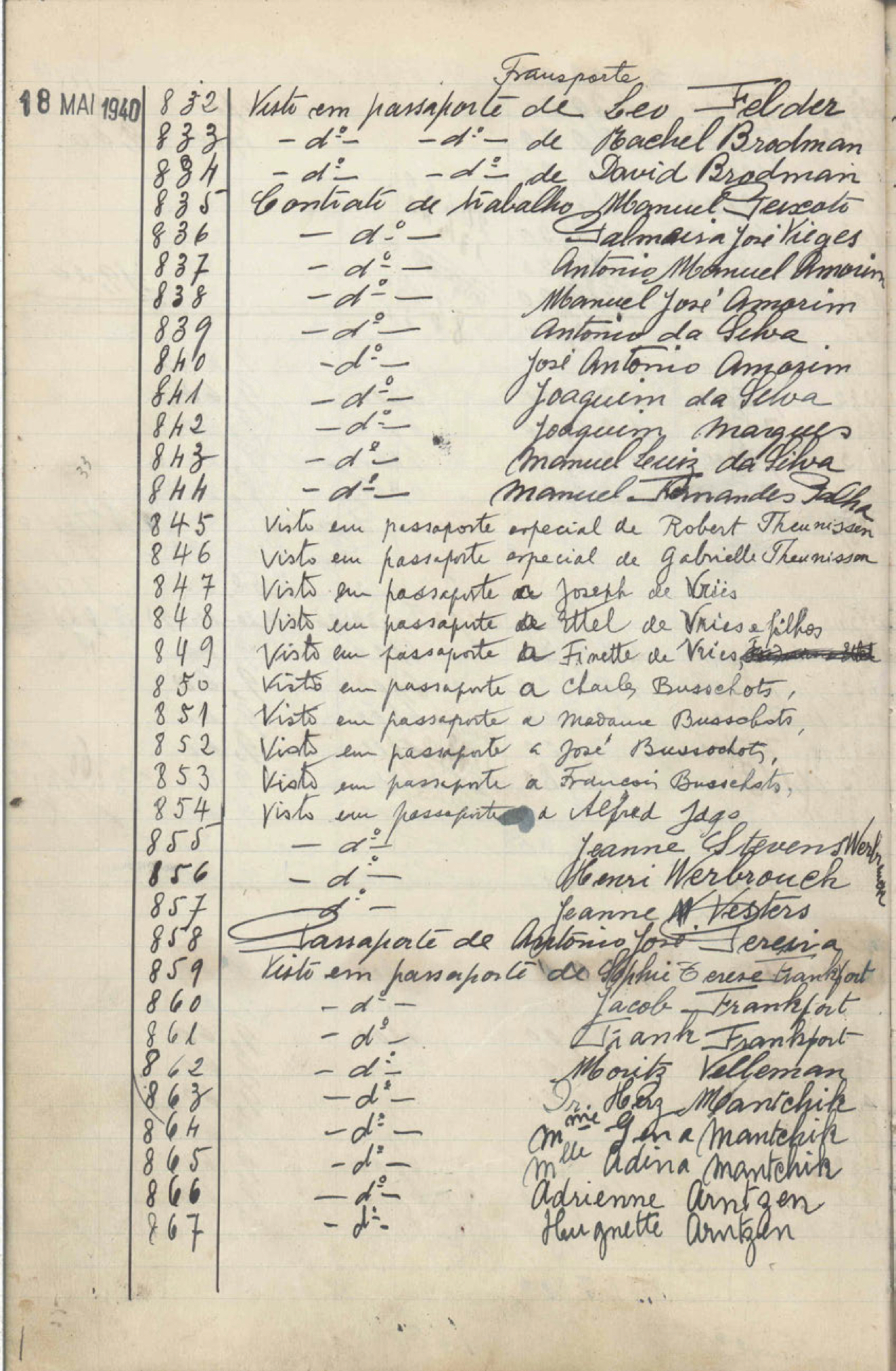 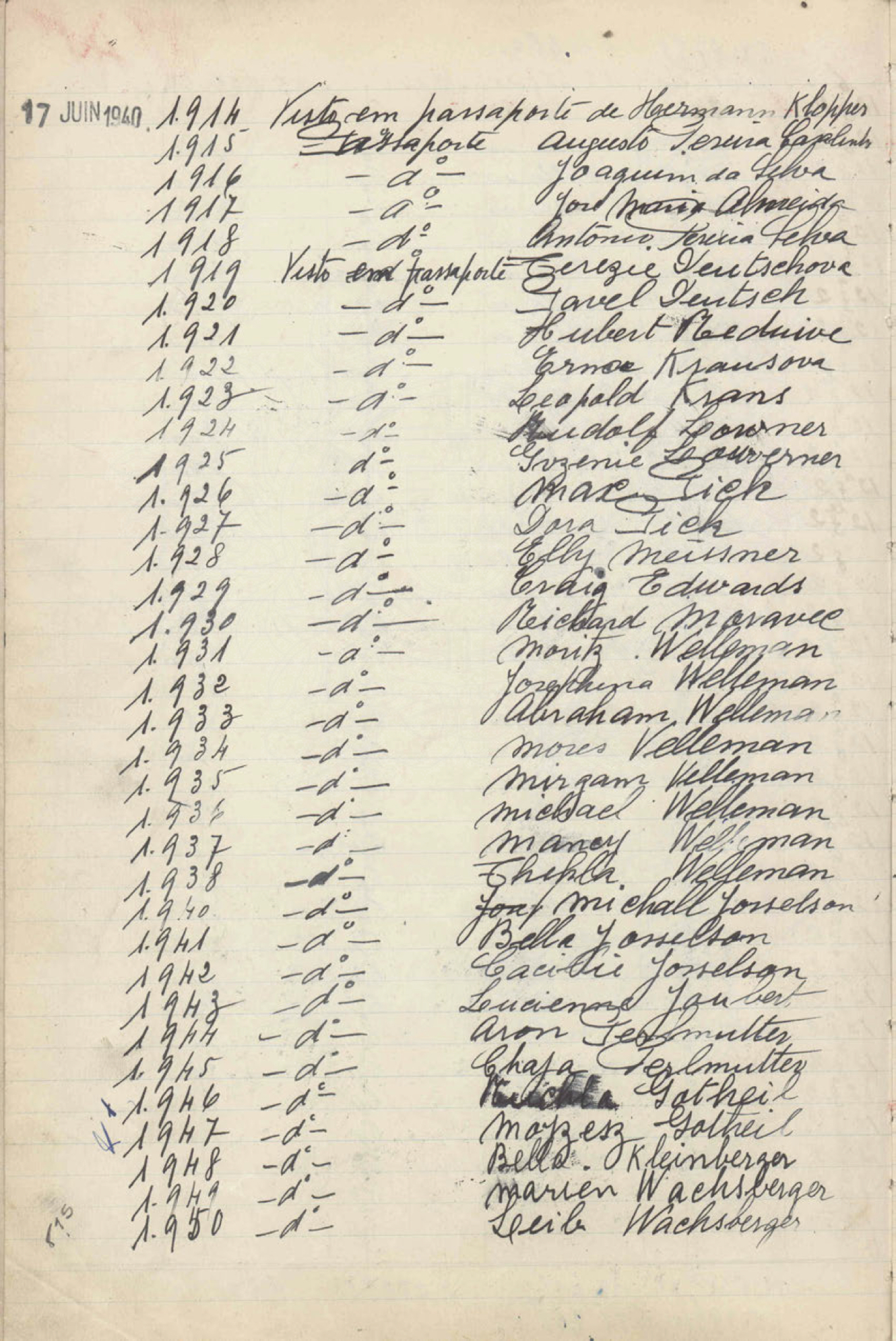 I was born in Amsterdam (Holland) but when I was four years old my parents moved back to Antwerp (Belgium) where they had lived before the First World War. I lived there for the next twenty years until the Germans invaded Belgium in 1940.

We left Antwerp on May 12, 1940, two days after the Germans invaded Belgium. My parents, my sister and I went first to La Panne on the Belgian coast, believing that the Germans would never be able to break through the defense line of the Albert Canal, which was an extension of the French Maginot Line.

My brother Arthur was already in the United States because he had left Belgium in 1939. My sister Emma lived in Holland with her husband and little daughter Rita. However, they lived in a little village just over the German frontier and so they were occupied in the first hours of the invasion. (The Germans invaded Holland and Belgium at the same time.) My sister and family were sent to a concentration camp, and after the war we found out that they, together with millions of other Jews, perished in the gas chambers.

My parents rented an apartment in La Panne and paid for three months, but within forty-eight hours the Germans had broken through. Meanwhile, while walking on the beach (La Panne was a beach resort) we met my father's brother Michel and his wife Joske and my father's father (my grandfather) and my Aunt Nancy who lived with my grandfather. They had come in Uncle Michel's car. He was the only one in the family who owned a car. We decided to stay together, and all eight of us plus our baggage traveling in one car, we left for France. Before leaving my mother discovered that she had left one of her diamond rings on one of the washstands in our house in Antwerp. I called up my friend Flor and told him to go into the house and take the ring. After the war Flor returned it to us.

We were of course very cramped in the car but after several days we managed to reach Bordeaux in slow stages. In Bordeaux, which was a city of 400,000 to 500,000 people, there were at that time 500,000 refugees and we stayed for only one or two nights in a hotel. Since I had business friends there, I contacted them and they saw to it that the whole family got settled in Cusac (about 40 kilometers from Bordeaux) with somewhat impoverished Chateaux owners. We planned to stay there until the Germans were defeated. However, a few weeks later the French army was defeated. General Pétain took over the French Government, and collaborated with Hitler. That was a signal for us to move on once more.

Meanwhile, however, Uncle Michel's car had been confiscated by the French because no civilians were permitted to drive. We now needed to get out of France, but the situation in France was rather complicated because in order to get out of France one needed a visa de sortie (exit visa) which you could only obtain on the basis of a visa for a final destination. At that time no country would issue such a visa. Michel had contacted the Cuban Consul, and he proposed to ''sell"" us eight visas (of course they were not valid for entry into Cuba), but the price was so high that we could not afford to do it. However, the Consul had given Uncle Michel his visiting card, which came in handy later on, as you will see.

While the rest of the family stayed in Cusac, Uncle Michel and I went to Bordeaux and finally were able to ""buy"" eight visas for Haiti (of course, not valid). At that time the only currency that people would accept were gold coins, and fortunately both my parents and Uncle Michel had gold coins. On the basis of these Haitian visas we then went to the Portuguese Consulate with the eight passports. At the Portuguese Consulate it was bedlam, with hundreds of people all trying to get transit visas. I noticed that the Consul was in another room and his secretary would bring him a batch of passports, to which she had already affixed the visa stamp, for him to sign. I thereupon put myself at a desk and ""helped"" her by stamping everybody's passport, which the Consul signed.

We then went to the Spanish Consulate as we also needed a transit visa for Spain. These transit visas were given on the basis of the fact that we had visas for a final destination (Haiti). The only thing we now needed was the exit visa from France. We started out very early in the morning, but by the time we arrived at the Prefecture where the exit visas were given a long line of people were already waiting to get inside, and that line was not moving because the police who were guarding the door were only letting diplomats in. Uncle Michel took all eight passports and, going to the front of the line, showed the police the visiting card of the Cuban Consul and was promptly let in the door. A few minutes later he had all eight exit visas, and we were able to leave for Spain.

The border between France and Spain is the Hendaye bridge. One side of the bridge is France and the other side is Spain. My father and sister and Uncle Michel were in the diamond business and their passports were stamped accordingly. My mother and I, however, had passports in which there was no such indication. We were afraid that the diamonds that my father and Uncle Michel were carrying would be confiscated. The decision was made, therefore, that those with diamond trader in their passports, as well as Opa (Grandpa in Dutch) and Nancy would go by car over the bridge without any diamonds, while my mother and I would have all the diamonds and we would walk over the bridge. I had the diamonds in a handkerchief and was wiping my brow with it. (It was a hot day and I was also very nervous.) Nobody asked any questions so the entire elaborate plan proved to have been unnecessary.

We drove through Spain to the border of Portugal. Since we were no longer in immediate war danger we decided to break up. Uncle Michel and Joske went on by themselves and the other six took the train to Lisbon. Here again I had business friends who brought us to Cascais, a small fishing village outside of Lisbon. My parents rented an apartment and I traveled by train every day to Lisbon where I worked in my friend's office.

I now tried to get visas for the United States. We needed something called affidavits from responsible people in the United States. My brother could not help because he was not in a financial position to issue an affidavit. We did obtain them from well-to-do cousins living in the United States. The United States Consul in Lisbon told me, however, that he could not issue entry visas for us unless we could prove that we would not become a charge to the government for at least two years. When I told him that my parents had a bank account in New York he said that he needed official proof. By the way, I was the only one who negotiated with the American Consulate, first of all because I was the only one who spoke some English, but also because I was in Lisbon every day while the others stayed in Cascais.

A few weeks later I went back to the Consulate with a notarized statement from the Guaranty Trust Company, whereupon the Consul told me that my parents could leave for the United States and he would issue visas for them. When I asked why Molly and I could not leave he replied that we were no longer minors and my parents had no obligation to support us. We would need our own capital. My parents refused to leave without us, but I knew that as long as they did not go they could not open an account for us, because the law stated that all accounts of citizens from occupied areas were blocked until three months after their arrival in the United States. Since I was earning money in Lisbon I decided to buy steamship tickets for my parents (there were no planes) and literally forced them to leave. In due course, they took money from their account and opened bank accounts for both Molly and me. There was not sufficient money to establish accounts for Nancy and Opa but they came later when Uncle Michel established accounts for them. On the basis of these accounts Molly and I were able to leave Portugal, and came to New York. We arrived in February, 1941. And that is how we immigrated into the United States.