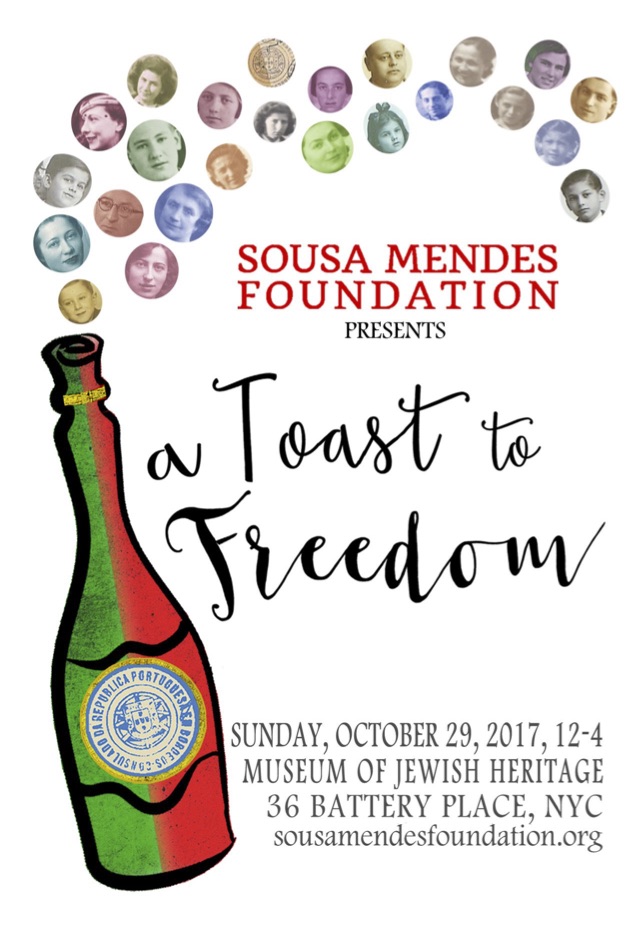 Founded in 2010, the Sousa Mendes Foundation perpetuates the memory of Holocaust rescuer Aristides de Sousa Mendes as an example of compassion and moral courage.

A Toast to Freedom!

Live music! Kosher meal! Fine wine! Festive attire! Come join us on Sunday, October 29, 2017 from noon to 4 at the Museum of Jewish Heritage in a magical and inspiring setting next to the Statue of Liberty for a gala luncheon to benefit the Sousa Mendes Foundation. Reserve your tickets today!

If you wish to attend, please contact us at 877-797-9759 or info@sousamendesfoundation.org, as the ticketing system has been closed for the event.

Actor Michel Gill (“Ray Donovan,” “House of Cards,” “Mr. Robot”) is the son and grandson of Sousa Mendes visa recipients and will serve as our Master of Ceremonies!

Save a life, save a world! Holocaust rescuer Eduardo Propper de Callejón was recognized by Yad Vashem for his action at the Spanish Consulate in Bordeaux. His son Felipe Propper will say a few words, as will Marta Balinska, whose family was saved by both rescuers.

Many fabulous and unique items on offer including a day on the set of the Netflix-original series “House of Cards,” a vacation paradise on the island of Nantucket, and much more!  To view the complete auction catalogue, please click on the yellow button below.

Benjamin Sloman is rapidly emerging as one of the most exciting young Australian tenors of his generation. He has studied in Italy and the United States under the tutelage of Gioacchino Li Vigni, Nicola Martinucci, and Salvatore Fisichella, and in 2013 and 2016 was awarded fellowships from the Mediterranean Opera Studio (Italy) for intensive study with opera luminaries Marcello Giordani, Pietro Ballo, Mariella Devia, Jennifer Larmore, and Giuseppe Filianoti.  In 2012 he became the first Australian to sing in a fully staged operatic production in New York’s Central Park in a leading tenor role when he sang the role of Pinkerton in Madama Butterfly with the New York Grand Opera. Reviews of that performance described him as possessing a “brilliant tenor voice with torrents of golden sound” (La Voce Italiana).

Gilad Paz commands the stage “with great feeling whether being imperious or amorous,” and brings new life to every role with his energetic and nuanced performances. His latest performances include, among others, the role of Tony in West Side Story, the role of Coach in the newly-written BOUNCE: The Basketball Opera, Spalanzani & Nathanaël in Les contes d’Hoffmann, and the role of Rabbi Azrael in a premiere presentation of Joel Mandelbaum’s The Dybbuk.  His concert solos include Händel’s Messiah, Judas Maccabaeus, Missa Solemnis, Mozart’s Coronation Mass K.317, Bernstein’s Songfest, Weill’s Mahagonny Songspiel, and Beethoven’s Ninth Symphony. He also appeared as soloist in both St. Patrick’s Cathedral and the Stern Auditorium at Carnegie Hall.
Marina Harris has been praised by The San Francisco Chronicle for her “knockout combination of vocal power and expressive eloquence.” Recently, Ms. Harris garnered national attention as a last-minute replacement for Patricia Racette as Elena in Boito’s Mefistofele, the season opener for the San Francisco Opera. Her roles include Tatiana in Eugene Onegin, Cio-Cio San in Madama Butterfly, Ariadne in Ariadne auf Naxos, Miss Jessel in Benjamin Britten’s The Turn of the Screw, and Arabella in scenes from Richard Strauss’ Arabella. The San Francisco Chronicle said about that performance, “Sopranos who can sing Strauss’ music this well are rare, and to be treasured.”
Pedro da Silva is the foremost exponent of the Portuguese guitar in the United States. He is the Music Director of the Manhattan Camerata, a New York-based ensemble that combines classical music with elements from different cultures. His compositions and performances have taken him to some of the most prestigious concert halls in the world, including Carnegie Hall, Lincoln Center, The Kennedy Center, the Palace of Versailles, Centro Cultural de Belém and the Monserrate Palace in Portugal, Auditorio Silvestre Revueltas in Mexico City, the Kew Royal Palace in London, and many others.
Neely Bruce is the John Spencer Camp Professor of Music at Wesleyan University. He is the composer of over 800 works, including operas, oratorios and other choral music, orchestral works, solo songs, seven documentary scores for public television, and some 14 hours of solo piano music. The gala luncheon “A Toast to Freedom!” will include a sneak peak of highlights from his dramatic oratorio, Circular 14: The Apotheosis of Aristides — a work that has been performed in Washington, DC and Los Angeles, and is soon to be played in Salt Lake City and Jerusalem.